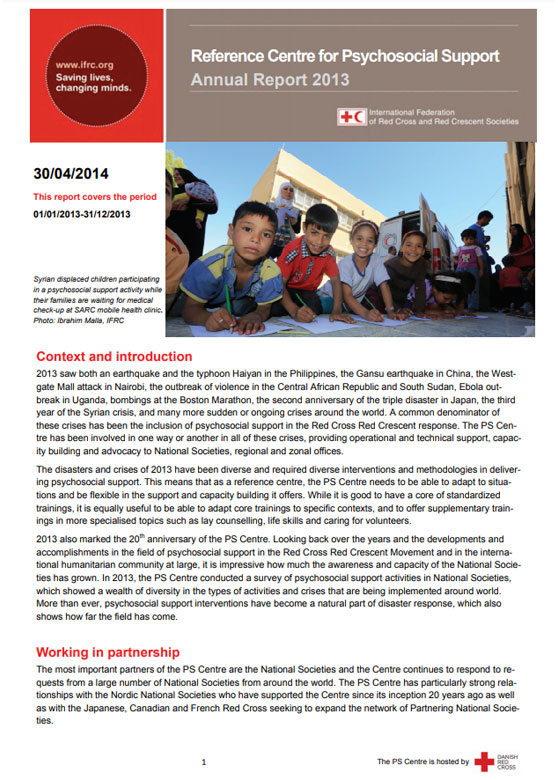 2013 saw both an earthquake and the typhoon Haiyan in the Philippines, the Gansu earthquake in China, the Westgate Mall attack in Nairobi, the outbreak of violence in the Central African Republic and South Sudan, Ebola outbreak in Uganda, bombings at the Boston Marathon, the second anniversary of the triple disaster in Japan, the third year of the Syrian crisis, and many more sudden or ongoing crises around the world. A common denominator of these crises has been the inclusion of psychosocial support in the Red Cross Red Crescent response. The PS Centre has been involved in one way or another in all of these crises, providing operational and technical support, capacity building and advocacy to National Societies, regional and zonal offices.

The disasters and crises of 2013 have been diverse and required diverse interventions and methodologies in delivering psychosocial support. This means that as a reference centre, the PS Centre needs to be able to adapt to situations and be flexible in the support and capacity building it offers. While it is good to have a core of standardized
trainings, it is equally useful to be able to adapt core trainings to specific contexts, and to offer supplementary trainings in more specialised topics such as lay counselling, life skills and caring for volunteers.

2013 also marked the 20th anniversary of the PS Centre. Looking back over the years and the developments and accomplishments in the field of psychosocial support in the Red Cross Red Crescent Movement and in the international humanitarian community at large, it is impressive how much the awareness and capacity of the National Societies has grown. In 2013, the PS Centre conducted a survey of psychosocial support activities in National Societies, which showed a wealth of diversity in the types of activities and crises that are being implemented around world. More than ever, psychosocial support interventions have become a natural part of disaster response, which also shows how far the field has come.